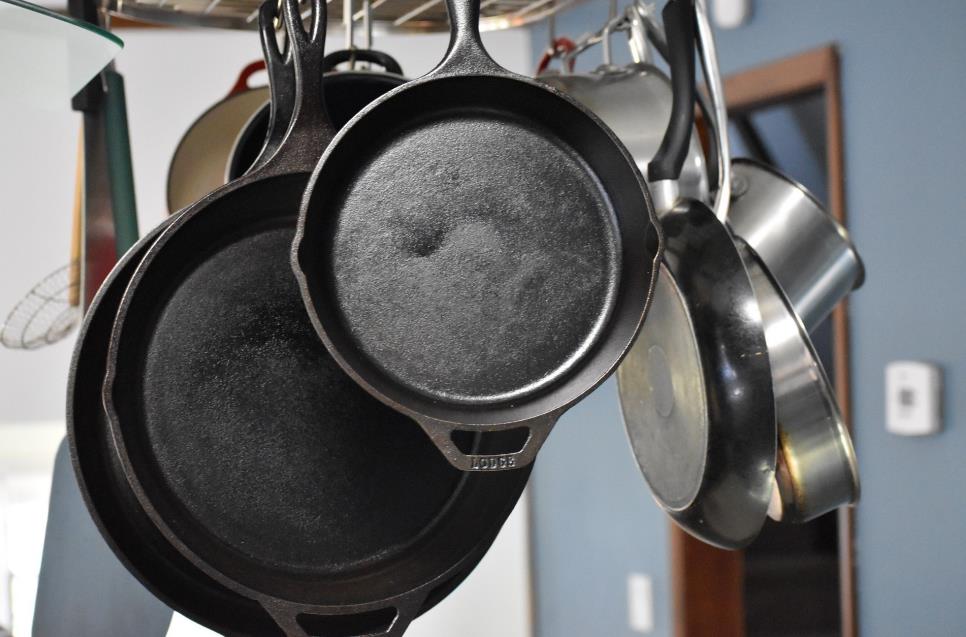 Cast iron has many devoted adherents today and has been around for hundreds of years because it’s an efficient and extremely resilient cooking material.

In many families, the cast iron skillet will be passed down through the generations, looked after, and loved for the meal memories associated with it.

Can cast iron cookware be washed in a dishwasher though? The short answer is ‘No’, and we’re going to explain why along with some other very useful information and tips!

What is cast iron and how does it perform for cooking?

Cast iron is an iron-carbon mixture, and it’s a product of melting iron ore in a blast furnace. Cast iron has a carbon content of more than 2% and is workable in the manufacturing phase because of its low melting temperature and machinability.

It can also withstand the direct heat of a fire which is important for people cooking in rural areas or outdoors, for example at a hunting camp.

Nowadays it’s also used indoors for frying pans, casserole dishes, roasting tins, and the like and it’s so multi-purpose that it can be used to cook everything from cornbread to pork chops.

Cast iron retains heat beautifully. It’s versatile enough to move from fire or stovetop to oven and it travels well and isn’t prone to cracks or shattering like ceramics or glass.

As a bonus, cast iron lovers believe that it develops a ‘patina’ of flavor over time from all the meals cooked in it, this is a prized quality. And for anemics or those not getting enough iron in their diet, cast iron can add iron to the food cooked in it, enriching it.

As we’ve seen, cast iron cookware has its fans for good reason! Now, the core question:

Can you put cast iron cookware in the dishwasher?

No, cast iron cookware cannot be put in the dishwasher.

Why you shouldn’t and what will happen

Putting cast iron utensils in the dishwasher damages them because it causes them to rust. This is bad for both the cookware’s surface and the food to be prepared in it in the future.

The very hot water and caustic detergents in the dishwasher will strip away the oil on the cast iron surface which protects it from corrosion. Exposed to water and oxygen, the iron will then oxidize.

This is how surface rust forms, which is unsightly, prone to flaking off and will give a nasty flavor to the food.

Besides which, a rusted surface will be pitted which means it can harbor bacteria growth and it will be more difficult to clean!

How to clean cast iron cookware

Now that we know that the dishwasher is out, it may be feared that cleaning cast iron pots and pans is a complicated, tiring, and a big messy job. This is not the case at all.

Follow our simple step-by-step instructions below to clean any cast iron cookware quickly:

Pro – tip: Clean a cast iron utensil as soon as possible – preferably while it’s still warm, and don’t leave it soaking in the sink!

Easy clean hack:  If a cast iron utensil is stubbornly dirty and the residue is stuck on it, put hot water into it and bring it to the boil on the stovetop. Allow the water to boil for a minute or two, and then remove it from the heat.

Wait until the water has cooled, and then wash the utensil following the steps above.

Hot water and dish soap work well as a general washing medium for metal cookware.  Metal cookware should typically be washed by hand and dried thoroughly after each wash.

If food gets stuck, or the pot or pan is very dirty, consider using a paste of 1 cup of water mixed with 2 tablespoons of baking soda.  Use this paste on the cleaning tool and utensil surface to gently lift and abrade off caked-on food.

Never use vinegar or other acids to clean metal, as these will corrode metal surfaces.  Abrasive scourers should be avoided on metal cookware that has a non–stick coating, a softer dish sponge is a better choice.

No. Marinades and things like salad dressings often contain some kind of vinegar. Vinegar contains acetic acid and if it sits in cast iron it will leach trace amounts of metal molecules into the food and make it taste unpleasant.

This may seem like an easy fix, but it doesn’t work. Instead of cleaning cast iron, the ‘self–clean’ mode will strip and burn off all the utensil’s protective seasoning, leaving it vulnerable to corrosion.

Seasoning is the layer of baked-on (polymerized) oil that protects the cast iron’s surface and makes it rust resistant. It’s an essential part of cast iron care.

Conventional wisdom holds that (non-enameled) cast iron should be seasoned 3 times after purchase to build up a good protective layer, and then re-seasoned every 3 months or so if used regularly.

Some cast iron is bought pre–seasoned, so the manufacturer’s instructions for seasoning should be followed.

Here’s how to season a cast iron utensil:

Cast iron is deserving of its long-lasting popularity for cooking both outdoors and in the indoor kitchen. If seasoned and cleaned properly, cast iron will stand the test of time and become one of the cook’s mainstay kitchen tools for culinary success.

Thank you for joining us for this brief but intense look at cast iron and looking after it properly.

At LeeKnives we’re staunch supporters of the ‘old school cool’ cooking methods and cast iron is still around today because it works.

We’re always on hand to answer your knife, knife accessories, and general kitchenware questions, so do contact us if you need kitchen tools info or want to chat about business opportunities.