What Is a Knife Bevel? 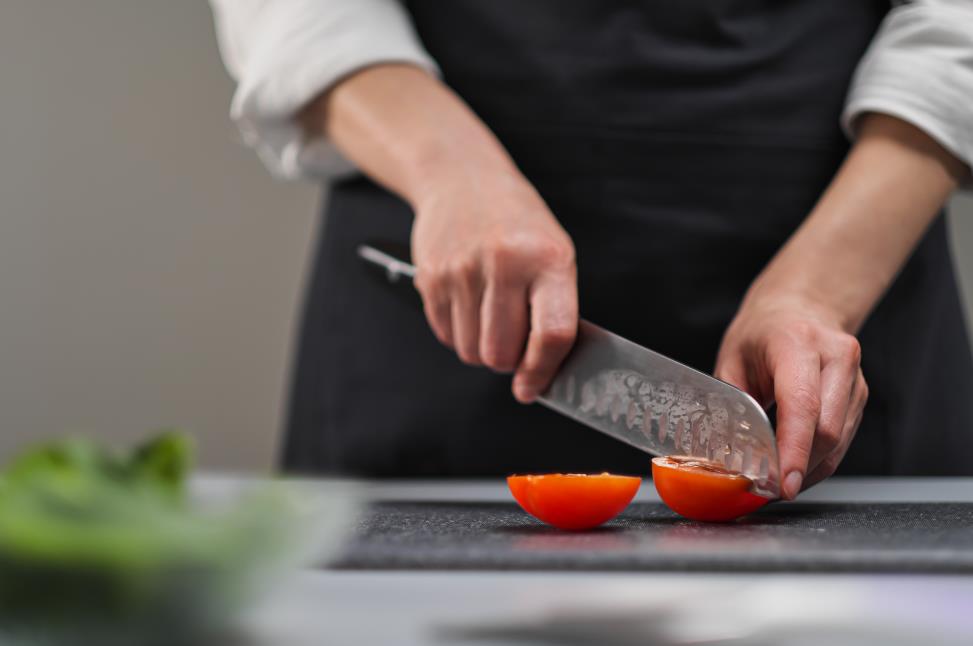 As the name suggests, the knife bevel is the curved section near the blade’s sharp cutting edge. A knife generally has two bevels on both sides of the blade. Together, they curve forward and meet at the end to form the blade’s thinnest point, the cutting edge.

Grab any knife and take a closer look. You’ll be able to see at least one side of the blade’s edge having a different angle than the rest of the blade. Depending on the knife type, this can be on either one side or both. This is what separates single and double bevel knives.

Although a very small detail, the bevel plays a significant role in knife design. It’s closely tied with the grinding method of the blade. Ultimately, affect how the knife performs.

In this article, we’ll take a closer look at knife bevels, explain the difference between single and double bevel knives, and different types of edge designs. Ready to learn more about knives in this in-depth article? Read on!

What is a double bevel knife?

The blade of a double bevel knife is ground on both sides. Almost all western knives feature this bevel design. These knives push the food on both sides while an ingredient is cut. This makes them easy to use, not requiring additional skills or practice from the user. The double bevel knives are significantly more common in the market as a result.

Double bevel knives are robust as their edge is thicker, making them appropriate for heavy-duty use. Using a double bevel knife to cut all kinds of ingredients, even dense foods like bones or frozen goods don’t typically pose a problem. However, the steel used for making the blade must be tough enough to endure the stress of a powerful strike.

The double bevel design can be found in any knife but it’s more prominent in all-purpose chef’s knives. Additionally, they are excellent for ambidextrous use, making them ideal for everyone.

The double bevel edge sometimes isn’t as simple and straight, though. There are variations to them. They can have a hollow grind, flat grind, and more, while single bevel knives only have a chisel grind – read more on the edge grind below.

Additionally, double bevel knives are sharpened on both sides. Since only one side of single bevels knives are ground, sharpening the side forming the edge is enough.

What is a single bevel knife?

While single bevel knives have only one side of the blade ground, the other isn’t always left flat. Some feature a concave design, known as urasuki.

Although the sharper edge and easier cutting are things that all cooks would appreciate, this is only suitable for certain ingredients. Using single bevel knives to cut through anything dense that requires excessive force can chip the edge unexpectedly. That’s why these knives aren’t as recommended for beginner cooks.

As single bevel knives require some practice to get used to the cutting angle, experienced chefs favor them more. You can find these knives in Japanese restaurants for specific purposes like slicing sashimi. They also require more careful upkeep because of the delicate edge.

Lastly, single bevel knives aren’t ambidextrous as the edge isn’t ground on both sides. The bevel needs to be on the right for right-handed people and left for left-handed people.

Certain things dictate sharpness in knives. The general idea is the smaller the bevel angle, the sharper the edge. Double bevel knives form the edge from both sides, resulting in a wider angle. On the other hand, the design of single bevel knives allows them to form the cutting edge at smaller angles, making them sharper.

Overall, if both blades are forged with the same steel, single bevel knives are much sharper. Since different steels have different attributes, they are just as vital. Read on different knife steels on the LeeKnives blog.

Again, under the assumption that both knives are made with the same steel, single bevel knives are flimsier – simply the edge is slimmer.

For double bevel knives, the area to reduce the impact from outside forces is wider. This makes them more robust to heavy cutting and misusing. Let us put it this way: the force from the impact, for example, cutting forcefully, is absorbed by both sides of double bevel knives. In single bevel knives, it travels through one side more, which is also the thinner, making them less ideal for robust use.

A double bevel knife applies to the general sharpening rule that involves a whetstone. Note that you will need to evenly sharpen both sides to their original state, or else there will be an asymmetrical blade.

As mentioned above, single bevel knives aren’t sharpened on both sides. They require a much more sophisticated sharpening process. This different procedure consists of three advanced sharpening techniques: Uraoshi, Kireha, and Kobatsuke.

Uraoishi simply means to sharpen the concave area (urasuki) on the flat side of a single bevel blade. This process isn’t like sharpening the cutting edge and requires a lower grit whetstone.

Kobatsuke is the sharpening technique using a finishing stone to create a two-step microblade. It’s done by carefully applying minimal pressure on the blade and stroking it back and forth from the heel to the tip. This technique is often utilized by professional sharpeners specializing in sharpening Japanese knives to make the edge last longer.

You can watch the following video starting from 16:30 to take a look at how these three distinct techniques are performed.

Double bevel knives can tackle more culinary tasks as they have a more durable design. Because of this, they are much more in demand than their single bevel alternatives. The overwhelming majority of western knives and multi-task Japanese knives, like Gyuto, have a double bevel.

However, single bevel knives still get a fair share of the market though mostly by professionals and serious cooks. Sashimi knives like Yanagiba and Deba used for filleting fish almost always come with a single bevel edge.

What is knife grind?

Knife grind is a blacksmithing technique that shapes the blade’s edge. It creates the bevel and determines the thickness. Due to this, much of how sharp a knife can get is determined by this process.

Different types of grind variations are mostly available with double bevel knives for different purposes. Chisel grind is more common with single bevel knives as there is limited area and design to change the design.

By grabbing a knife and looking at it vertically from the handle, the blade’s thickness will show a narrow triangle shape. A closer look reveals the grinding method applied to the knife.

There are four distinct grind features to look for in a blade. These are as follows.

The transitions from the blade bevel to the apex bevel are often invisible to the naked eye as it has to be very smooth to ensure slick cuts.

The following diagram can help visualize this for the better.

Depending on the grinding method, the blade edge appears in different shapes. We will introduce some of the most seen blade edge types in the following.

V-type edge is the most widespread among all double bevel knives. The blade transforms to a steep angle when it reaches the edge, forming a V shape tip at the end. Most double bevel knives in the market come with a flat edge. They are easier to produce in mass and relatively durable.

The convex edge is slightly rounded than the flat edge. This grinding method is considered the most durable among all types.

The convex grind is mostly found in outdoor knives and axes. They are less common in kitchen knives because only so few blacksmiths can create the perfect convex grind. Additionally, they are exceptionally challenging to sharpen. Convex grind knives are best sharpened by a professional sharpener. A beginner sharpener can unknowingly wear down more material from the edge than needed, resulting in a ruined edge.

Chisel edge can be accomplished only with single bevel knives because it’s a unilateral ground. We’ve covered the features of this ground type in the double bevel vs. single bevel section. The main highlight of this blade grind is it provides increased sharpness but also reduces durability.

Chisel edge, however, has several variations to it. The traditional Japanese knives have a chisel edge with Urasuki.

And to make it a tad more durable, some knifemakers will give the flat side a backbevel at the very tip to form a somewhat partial double bevel in a single bevel knife.

Blades with serrated edges are designed to look jagged at the edge. The serrated function is basically to tear food apart more easily. Such designs are often found in bread knives. The serrated blades require both pushing and pulling motions. They don’t go through ingredients as easily but can cut denser ingredients more efficiently, like a saw cutting through wood.

Customers that have little knowledge about knife bevel may experience chipping and cracking with single bevel knives. Since repairing chipped blades is a lot of work, it can quickly turn into an after-sale disaster.

We hope all the bevel talking answers some of your questions in mind. If there are still questions about knife bevel or knives in general, don’t hesitate to contact us. We provide a large collection of wholesale knife purchases for businesses of all sizes. 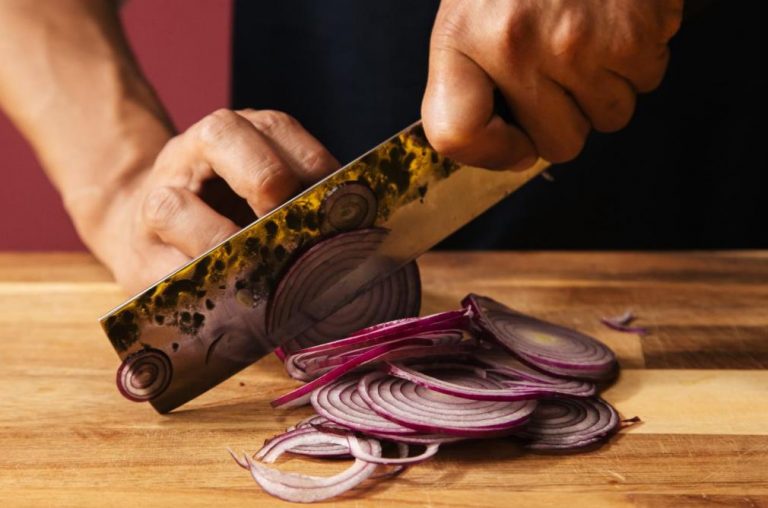 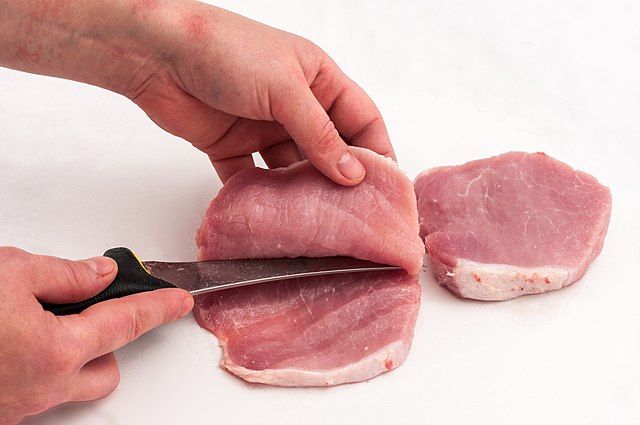