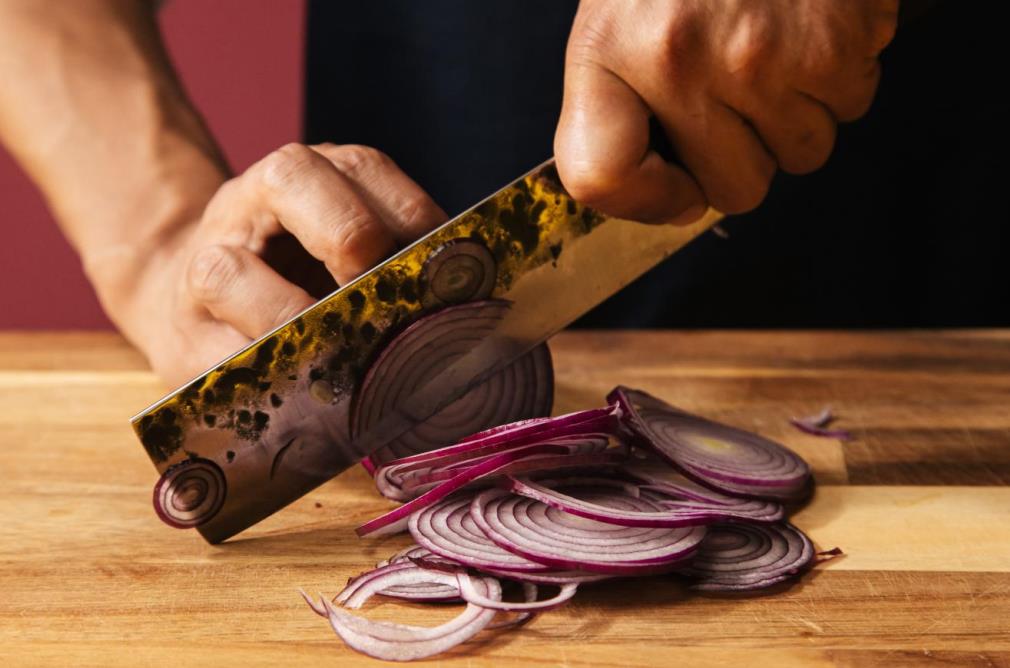 Usuba and Nakiri are two similar Japanese kitchen knives that even chefs commonly mistake for each other. The appearance of both is almost identical, and only minor differences set them apart.

Differentiating Usuba from Nakiri can get tricky for an unfamiliar eye. Separating one from the other takes more than just a glimpse unless you’re a knife enthusiast.

Read through this article to learn the differences between Usuba and Nakiri, covering blade design, uses, and pros and cons of each. We’ll also guide you through making the right decision on selling the right one for your knife store.

What is the Japanese Usuba?

Usuba translates to “thin blade” in Japanese. It’s the preferred kitchen knife for Japanese chefs to prepare sides for sashimi.

Professional chefs use this knife particularly to prepare daikon radish. Similarly to peeling a vegetable, cooks hold the daikon in one hand with rotary peeling to create long sheets.

Usuba has a rectangular blade design with a straight edge. It isn’t as tall as Chukabocho or a meat cleaver but not as short as a typical kitchen knife. The width of Usuba is similar to the heel of a large chef’s knife. Lastly, the blade length of Usuba ranges from 7 to 9 inches.

Though most multi-purpose Japanese kitchen knives feature a double bevel edge, like Gyuto and Santoku, Usuba has a single bevel edge. This cutting edge helps the cook to peel daikon easily, ensuring each sheet is smooth and tear-free.

Usuba has a relatively thick spine. This design element isn’t for nothing. It gives added strength to Usuba and makes it glide through ingredients without exerting too much force on the blade.

Since the Japanese cutting style involves the thrust-cutting technique more (chopping by moving the blade up and down on the board), the heavy spine fits Usuba perfectly.

These are the features and overall design of the traditional Usuba, known as the Kanto type. There is also the Kamagata version. This type of Usuba is specific to the Osaka region and has a pointed tip. The Kamagata version is comparable to Santoku in design, but cutting vegetables is its main focus.

For Japanese chefs, the primary use of Usuba is to make daikon radish for sashimi and cut vegetables.

The first is a highly specialized task that takes years of training to be proficient. The cook first holds the daikon in their non-dominant hand and rotates the vegetable against the single bevel edge of Usuba. This process creates an almost transparent sheet cut into extremely thin, long strips.

Usuba is also ideal for a bit robust work on vegetables. Using it to cut roots or shredding an entire cabbage fast won’t damage the edge. However, its blade isn’t sturdy enough for certain tasks. Cooks must avoid utilizing it on highly dense ingredients or frozen goods.

The blade length of up to 9 inches also helps with sizable and dense vegetables, like cauliflower and beetroot.

What is the Japanese Nakiri?

Translating to “knife for cutting greens,” Nakiri is the Japanese vegetable knife for preparing various cuisines. It has an incredibly thin blade that cuts veggies effortlessly.

Usuba has an entirely different look than the vegetable knife from other cultures, like the western paring knife. Japanese cooks mainly use this knife to chop, dice, mince, and slice vegetables and herbs.

Nakiri also has a rectangular blade design with a straight cutting edge but smaller. Nakiri lengths range from 5 to 7 inches. This size makes it light to hold. Nakiri is a lightweight knife that doesn’t tire the cooks quickly, with its spine thickness measuring about 2.5mm.

Unlike other Japanese kitchen knives with a particular use in mind, it doesn’t have a single bevel edge. Instead, it has a double bevel edge, making it less intimidating to home cooks and beginners. The double bevel edge also enables Nakiri to be sharpened more leisurely and forgive incorrect use at times.

Nakiri is the primary vegetable cutting knife for the Japanese. Cooks can use Nakiri to prepare vegetables for dishes, salads, and snacks.

The straight edge suits the thrust cutting technique so well. Chefs can chop, dice, and slice vegetables quickly without picking up another knife.

Nakiri may not provide as many uses to a western cook, like peeling vegetables and other precision work, but it’s possible. It just has a different technique that’s challenging to first-timers.

The lack of a pointed tip may make cooks think it’s unsuitable for certain cutting styles, like julienning. Nakiri’s forwardmost point is still sharp enough to execute these cuts.

The uses of Nakiri compared to Usuba’s almost make it seem like both knives are the same. As mentioned, it takes a curious eye’s close look to distinguish one from the other.

Usuba and Nakiri’s blade shape is the same. Both have rectangular bodies, narrower than a cleaver but still taller than a typical kitchen knife.

The differences are primarily at the spine and edge. Usuba is ground on one side, whereas Nakiri has a double bevel. While Usuba is quite sturdy, Nakiri is more fragile and better suited for cutting board work to chop, dice, slice, and mince vegetables.

As Japanese kitchen knives, Usuba and Nakiri come with the wa-handle. However, Nakiri is more popular in the western culinary world than Usuba. A non-Japanese person looking for a Nakiri might want it to be equipped with the western handle.

Nakiri with a western handle is a strong recommendation if your clientele is primarily western cooks that use Japanese knives.

They are both Japanese kitchen knives picked up for cutting vegetables. Nevertheless, depending on the cook’s needs, one is more versatile than the other.

If the cook needs to prepare vegetables in various ways for dishes, Nakiri is a more suitable option. The double bevel edge is easier for board work to chop, dice, and slice. The convenience that comes with this is especially beneficial for home cooks.

Professional chefs can easily pick up the pace with Usuba. The knife steering to one side is a problem, as it’s a single bevel knife. Because of this, cooks need to get a right or left-handed Usuba to match their dominant hand for correct and fast use.

Usuba and Nakiri cut the best following the thrust cutting technique. This method refers to up and down moves over the ingredients.

While the general use of these kitchen knives is similar, cooks have to take a different approach with Usuba when slicing. As Usuba is a single bevel kitchen knife, it will navigate to the ground side. It’s nearly impossible to do a perfect straight cut with it.

The cutting angle of single bevel knives is one of the reasons why Japanese chefs slice fish at a 45-degree angle with Yanagiba, for example.

Using Nakiri to cut is a bit more straightforward and doesn’t require specific angles. The double bevel edge pushes the food on both sides, creating an even cut. The familiar cutting style makes cutting with Nakiri easier for cooks picking up a Japanese kitchen knife for the first time.

Similarities between Usuba and Nakiri

Looking at these two distinct Japanese kitchen knives, we can say there are more similarities than differences. After all, they follow the same blade design elements, equal Japanese steel, and handle.

Enter the uses and specific details; the distinguishable features become more apparent. It takes a user to use them to notice the attributes that make them different.

Which one should you sell in your store?

The differences between Usuba and Nakiri can help you decide which one to sell in your knife store. If your business appeals to everyone, from an average cook to professionals that expect something extra, Nakiri is the best pick.

Usuba is more for knife stores with a serious clientele. Someone looking to prepare dinners at home won’t find it interesting. In that case, it’s better to present more reasonable Japanese alternatives, like the Petty knife.

Should you sell both?

Selling both Usuba and Nakiri makes sense for knife stores selling different types of knives. It will help you expand your reach. You’ll have various options when your customers look for a vegetable knife.

Also, picture this: a professional chef walks into your store and looks for a Japanese-style vegetable knife. The chances of their first instinct going for Usuba is much higher. It’s the other way around for home cooks or beginner chefs. They are more likely to pick Nakiri.

Having said this, selling both Usuba and Nakiri will lead to more sales in knife stores with users coming from various backgrounds. If you have specific types of customers, making this decision will require you to look at their preferences.

We have these Japanese-style kitchen knives in our catalog. You can place your wholesale order with private label services. LeeKnives can also customize your orders based on the specifications you give us. However, the MOQs are higher with these orders.

Use this link to check Nakiri knives, or contact us to request a custom quote. 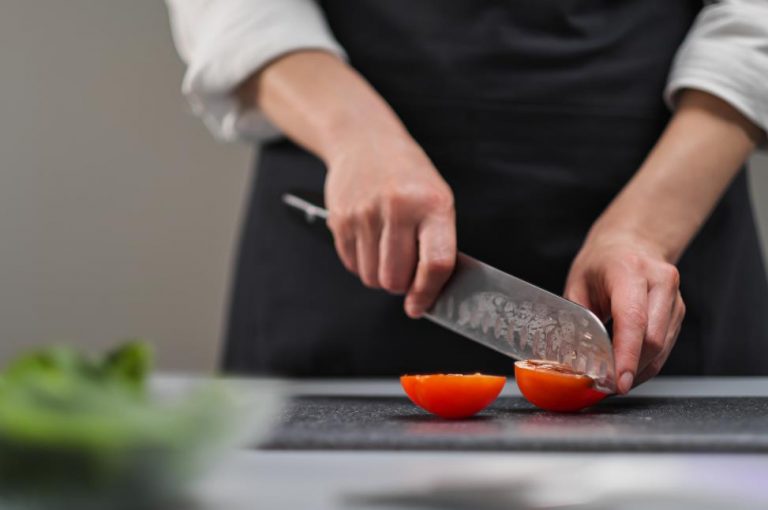 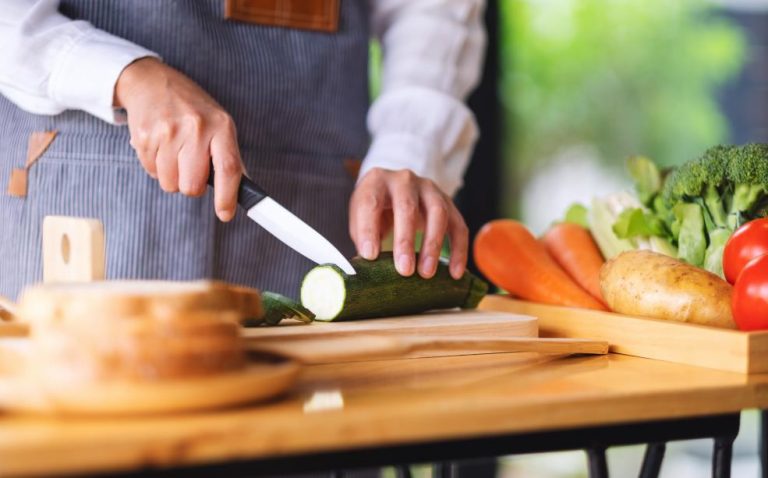