Gyuto vs Santoku: Settling the Debate 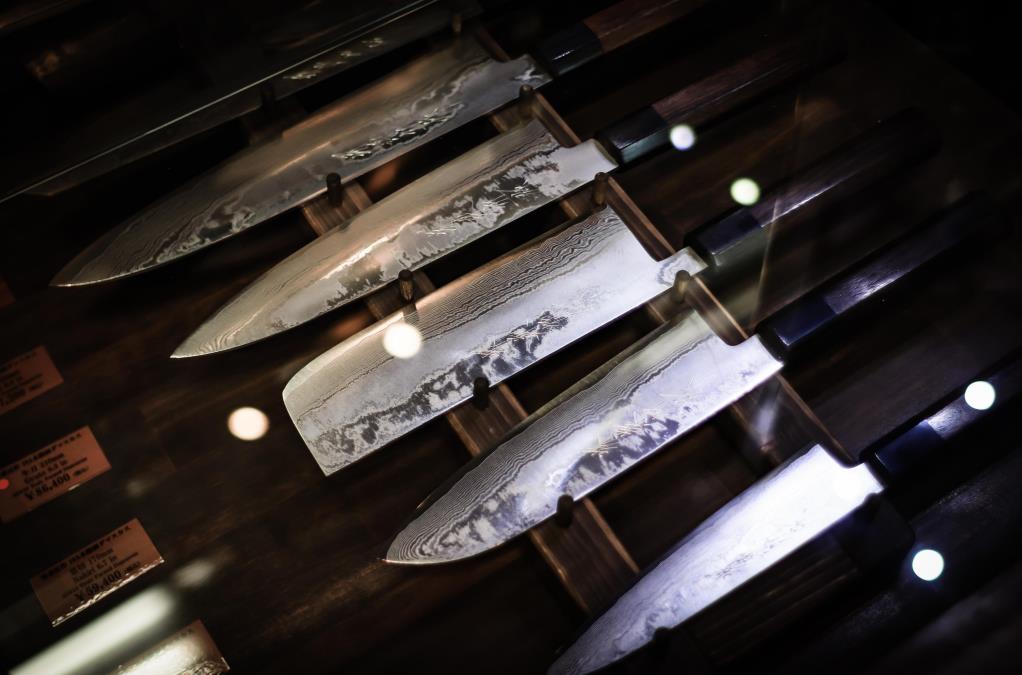 Santoku and Gyuto are the two most commonly used Japanese kitchen knives, not just in Japan but across the globe. Both are all-purpose kitchen cutlery with certain differences that set them apart.

Also known as Santoku-bocho, it’s the kitchen knife of three virtues: slicing, dicing, and mincing. Gyuto, on the other hand, was initially designed for cutting red meat. However, its versatility makes this a thing of the past.

This article will compare these popular Japanese kitchen knives and help you choose between the two for your knife shop.

What is a Santoku

Santoku is perhaps the most popular Japanese kitchen knife outside of Japan. Many western knife brands, like Wusthof and Zwilling, sell Santoku knives, particularly with a Granton edge. This added feature makes Santoku more useful by preventing slices stick to the blade.

This happened around World War II in the 1940s. However, it wasn’t the first time Japan had a foreign influence on the country’s kitchen cutlery. Gyuto also follows a similar story. Continue reading to find out how that went.

Santoku has a different design than a typical all-purpose kitchen knife found outside of Japan. Its flat edge profile chops and minces the best by thrust cutting. This cutting method refers to moving the blade up and down.

Santoku’s blade length is relatively short, usually at around 6.5 inches. This length makes the blade easier to control. Considering what the users demand from this knife, it’s at an optimal size that doesn’t tire the wrists after extended periods.

The most noticeable design element of Santoku is the spine. It transitions to a rounded tip, giving it a sheepsfoot appearance.

The western made Santoku knives are usually entirely rounded. Therefore, it isn’t sharp, and the cook can’t get much out of it. The Japanese-made Santoku knives have a little point to them. This sharp point helps julienning and making incisions.

Santoku excels at any straight cut on vegetables, fruits, and boneless protein. When the cook has a sizable amount of produce to chop, Santoku offers the most comfort and effectiveness. After all, it’s the kitchen knife designed for chopping and slicing.

The ability to execute straight cuts perfectly and rapidly is why many chefs apprentices turn to Santoku.

Other than just basic cuts, Santoku can help make precision cuts, like batonette, lozenge, and brunoise. All of these bring us to day-to-day cutting needs. When a cook needs a kitchen knife to prepare vegetables, herbs, and anything else that needs to be broken down into smaller pieces, Santoku is an ideal choice.

What is a Gyuto

Translating to cow sword, Gyuto is an incredibly versatile Japanese kitchen knife that was initially designed for working with beef. Today, its versatility overshadows its capability to butcher red meat.

After Sakoku ended, the period Japan closed its borders for nearly 200 years; the country began importing beef. A country that favored vegetables and fish soon became hooked on it. While the Japanese were developing a taste for beef, they didn’t have a dedicated kitchen knife to prepare it.

During this time, Japanese chefs had a dedicated knife for every duty chefs upheld – for example, Yanagiba for slicing fish and Honesuki for butchering. Since there wasn’t a reliable knife to butcher meat, Japanese chefs adopted the typical chef’s knife, and Gyuto was born shortly after.

Gyuto has pretty much the same blade design as the ordinary chef’s knife. Take a chef’s knife in one hand and Gyuto in the other. If the handles and the forging techniques are the same, there will only be minor differences.

Some Gyuto knives have the exact design as the chef’s knife, but their edge is a bit flatter traditionally.

These are minor differences. The primary difference is usually where the cook holds the knife. Generally, Gyuto has the traditional wa-handle. These knives are specifically referred to as wa-gyuto, and those with western handles are yo-gyuto.

Gyuto can handle everything Santoku can – some better and some not as much, depending on the task.

For example, dicing onions is easier with Santoku, but butchering a large slab of meat is where Gyuto will shine. The reason for this is mainly the blade design. Creating pockets and separating the meat from the bone is more manageable with Gyuto’s pointy tip.

Gyuto’s curved edge isn’t just for the pointed end. As opposed to thrust cutting, users can rock chop. Any cook familiar with either one – push cutting and rocking – will prefer a blade that suits the technique.

Most European and North American cooks prefer processing ingredients by rocking. The ability to do this makes Gyuto much more helpful to them, which can be at the center of decision-making.

Now comes the part that will influence any knife shop’s decision. As you can guess, they don’t share a lot of common traits. Where there are only a handful of similarities, there tend to be many differences.

Here is what your customers will find different between Santoku and Gyuto. Understanding these differences can help sellers decide on the right product to display in front of their shops.

Santoku has a relatively short blade for an all-purpose kitchen knife. The maximum length is usually 7 inches. As a result, it’s lighter than Gyuto. Cooks with smaller hands are likely to be more comfortable with Santoku.

Gyuto can be up to 12 inches. The lengthier blade gives more options to utilize it for different needs. Slicing by pulling the knife can cut more with a single stroke. A similar cutting style is also possible with Santoku, but the lack of a pointy tip doesn’t deliver the fine slices cooks desire.

Gyuto has a pointed tip, whereas Santoku has a rounded end. Although Santoku’s tip can handle certain cutting needs, like julienning, it can’t stab ingredients to make openings.

Santoku’s flatter edge doesn’t allow it to rock the blade. Gyuto can rock chop, and the pointy tip helps where it can rest on the cutting board. The tip acts as a stabilizing force, enabling the cook to rock chop confidently.

The knife bevel refers to the side the blacksmith grinds the blade. If it’s ground on one side, it’s a single bevel knife. If this process follows both sides, it’s a double bevel knife.

This is a straightforward way to explain the knife bevel. It affects how the blade cuts more than most people would think. Read more on knife bevel here.

Even though there are some exceptions, the stock Santoku and Gyuto you’ll find in kitchens have a double bevel. Santoku Genten by Kamikoto, a reputable Japanese knife brand, has a single bevel edge. The same can also be seen in a portion of Gyuto Kiritsuke, a variation of the typical Gyuto.

Santoku is usually cheaper than Gyuto. The reasoning behind this is primarily the size and steel. The size is self-explanatory – Gyuto can be 3 to 5 inches longer than Santoku.

The steel used for forging Gyuto knives is usually more on the premium end to achieve better edge retention and sharpness. These drive the cost higher, but the manufacturer decides on this entirely. That said, it wouldn’t be surprising to see a premium Santoku priced much higher than an average Gyuto.

As they are Japanese knives, Santoku and Gyuto normally have the wa-handle. The other handle types are visible in both knives but more apparent with Santoku. Since it’s a knife that German and French knifemakers adopted heavily, many Santoku knives have the usual western handle.

Santoku is for general meal preparation. When the cook needs to slice or dice the ingredients before cooking, it will accommodate their needs better.

Gyuto is for everyday use, like Santoku, but also for everything else. It’s undoubtedly more versatile, enabling it to tackle additional tasks. The lengthier blade and the curved edge are more pleasing for professional chefs and serious cooks.

The table below summarizes everything mentioned in this comparison article so far.

Similarities between Santoku and Gyuto

Just as these are expected, another trait these knives share is the type of steel used for forging the blades, at least from a Japanese perspective.

Generally, Japanese kitchen knives are made from hard steel, like VG-10 and SG2. These knife steels also have a fine grain structure that increases sharpness. With the grinding angle of Japanese blades, it wouldn’t be wrong to say that they are sharper than their western alternatives.

Other than these common grounds, Santoku and Gyuto are two different knives with few similarities.

Conclusion: should I sell Gyuto, Santoku, or both?

Knife shops with a mix of different types of kitchen knives can benefit from having both available to customers. If you have to choose between the two, do a quick analysis of your customers.

Are your customers made up of serious cooks or average users looking to grab something convenient to prepare meals? Finding the answer to this question can help make your decision easier.

Most professionals won’t go for Santoku instinctively because they can do the same things with a curved edge utilizing different cutting techniques. Anything that Santoku can do, a Gyuto can do just as fine. The versatility attracts professional chefs because a user can get more out of Gyuto.

On the other hand, Santoku is a more straightforward knife to use. It chops, slices, and minces. That’s pretty much it about Santoku. These may seem a bit basic, but so is the daily use the average user demands from a kitchen knife. This is why Santoku is a better fit for home cooks.

However, if chopping and dicing are the main focus, Santoku can stand out as the better pick, whether in a restaurant or at home.

There are also other details to consider. Find out what makes the perfect product to sell in your store here.

Since your customers will have their preferences, it’s essential to present them with the traits they need the most. The best way to go about this is through customization. See the OEM service we provide here. 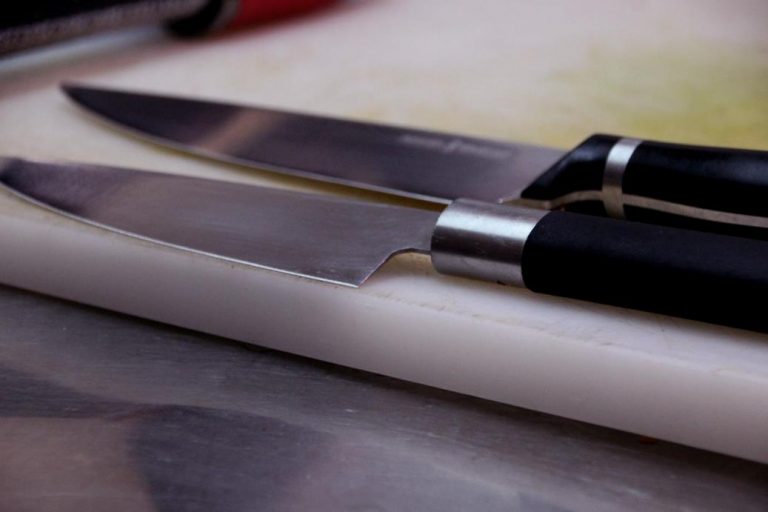 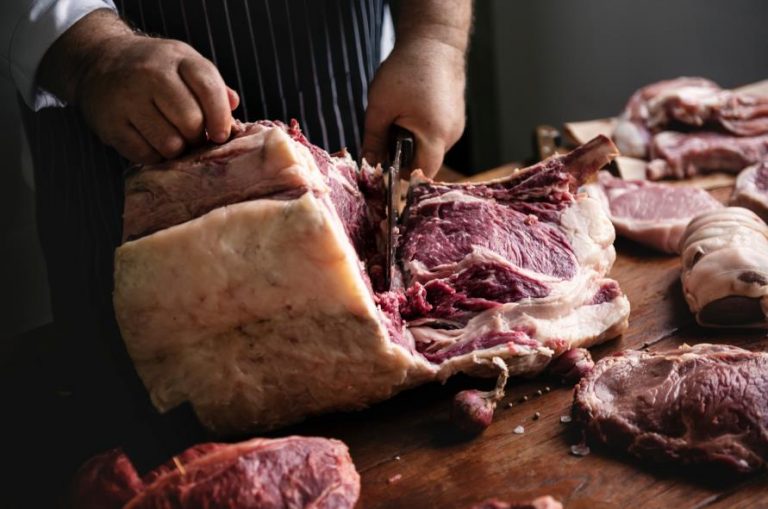